Everything You Should Know About Bat Guano

Bats are essential to have around, just not in our homes. Bat Guano is a serious problem!

As you can imagine, bats do not make the best pets (unless you have a fruit bat), yet bats are still an essential part of the ecosystem in the respect of controlling the insect population & plant pollination.

With the Zika virus present in America, bats provide hands-down the best natural pest control in the world, which is a real plus considering the number of infected mosquitos around. The only conflict in general between bats and people is when bats get in the house and start pooping everywhere!

In this article about bat guano, we cover everything you need to know, including the cost of guano remediation, the risk of disease, and who you should hire in order to get the job done right.

A single Bat dispels 10-14 droppings on average every 24 hours. Do the math if you have 20 bats in your attic, which is considered a smaller colony! That’s a lot of droppings, which is why the first step is to hire a qualified professional to first get rid of the bats and then restore the attic back to sanitary conditions.

*BROWSE OUR NETWORK OF PROFESSIONALS HERE* 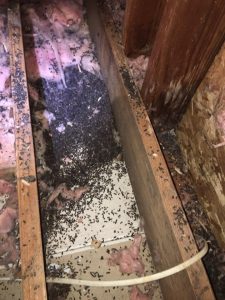 This is a small example of guano found in an attic. It took the bats a week to build-up this much feces.

A lengthy stay by a group of these winged mammals can produce deep masses of guano. Such heavy layers of guano can stress the surface that supports them, in most cases that surface will be the drywall ceiling. There can be occurrences where ceilings will buckle or fail due to the weight of the dense guano… But that isn’t probable unless the bat problems have been left unaddressed for several years. However, don’t underestimate the potential damages bat guano can cause to your attic. It’s bad news.

Insulation is typically ruined by bat guano and will need to be replaced, but that isn’t the only concern; in extreme cases of guano buildup, seeping moisture along with the surplus of added weight will lead to failure of the joists, which will compromise the entire structure’s durability. 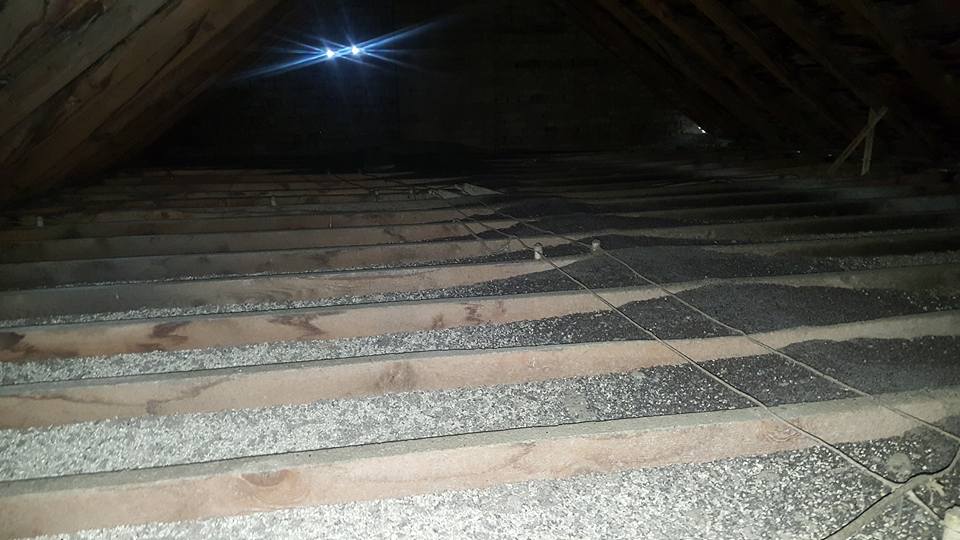 Hopefully this doesn’t happen in your home… But when it does, choose BatRemovalPro.com!

Cost Of Bat Guano Cleanup & Who To Hire

As you can imagine, bat guano cleanup is not a simple or easy task, it also carries risks to those doing it, hence why it’s not very cheap to hire a professional service. However, we will tell you this; it’s a lot cheaper to hire a wildlife pest company rather than a biohazard company… These are the only 2 types of companies who will offer this service. Contrary to what people often assume, insulation companies will not handle this sort of thing.

Wouldn’t you rather hire one company for everything? Bat removal and bat guano cleanup go hand-in-hand, which is why the majority of wildlife pest companies will provide attic cleanup services.

Our experts in The Bat Removal Pro Network can offer the services of bat control & bat guano removal. Browse our directory of local professionals who can help solve your problem today! 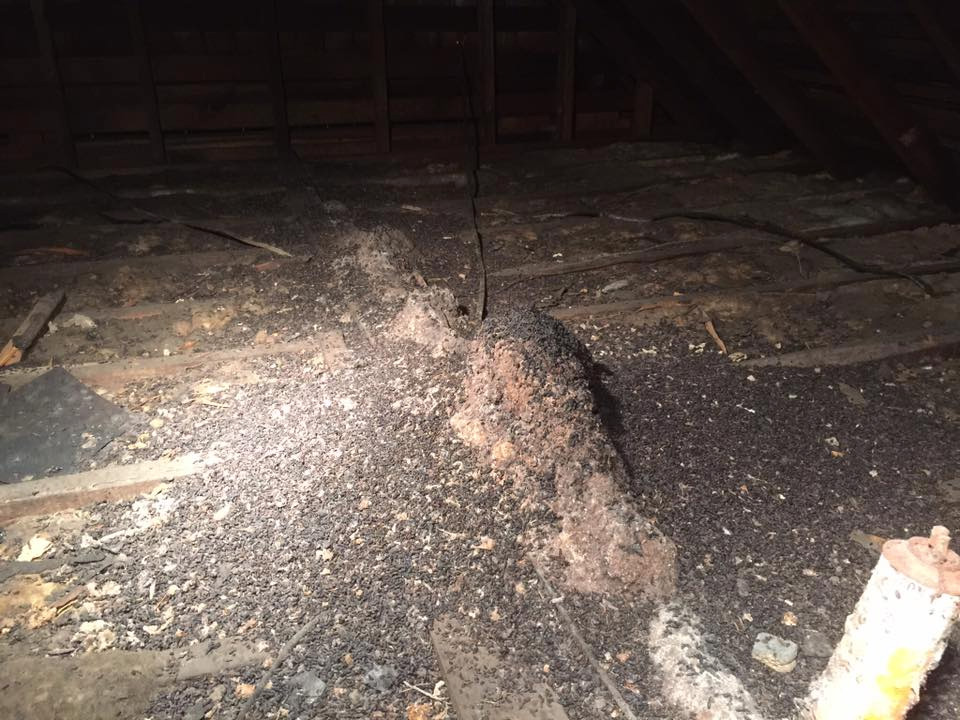 This is a pile of bat guano left by a colony of bats in an attic. The large bulge you see in the center of the mess is where the guano has become highly concentrated and, if broken apart, would look somewhat like sand. This form of concentrated guano is the most dangerous because the risk of people inhaling it and causing a lung disease known as Histoplasmosis.

While bats are the #2 rabies vector right behind dogs, there is another disease that is associated with the guano bats leave behind and not the bats themselves. Histoplasmosis is most dangerous for people in particular who have weak immune systems, or compromised immune systems due to an illness or substance abuse.

-People At Higher Risk Of Getting Infected By Histoplasmosis

Newborn infants are the most susceptible to be infected. Feeble elderly men & women alike will also have a higher risk of getting the disease. Adults who are in good health will generally never be infected simply because their immune systems are strong enough to ward off the infectious bacteria before the virus incubates. In most cases, it will take at least 12 days for the virus to completely manifest in the human body.

-Symptoms Of Histoplasmosis & How Bat Guano Can Cause It.

In cases where there is a fear that someone may have contracted the virus, it’s good to know what to look for. Infected individuals will generally start showing symptoms within 3-4 days after inhaling the bacteria.

The symptoms of histoplasmosis include; chest pain, rash, shortness of breath, body chills, a nasty cough, and running a fever. In all cases, treatment is available in the form of antifungal medications, but if left untreated for too long it can result in death, especially with infants. It’s a scary thought, but it can be prevented.

In the photo above this section, you can see where we explain the most dangerous form of bat guano. How this guano infects people with Histoplasmosis can be transmitted in a variety of ways. The first and most common way is when the homeowner goes into the attic without the proper safety equipment and attempts to clean the bat guano up themselves. Basically, it’s not good to stir this stuff up. That is exactly what causes the particles to go airborne & ultimately be inhaled into the body.. Don’t do ANYTHING if you aren’t qualified.