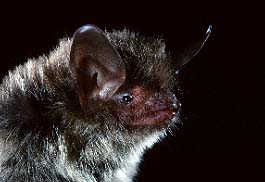 The northern long-eared bat is a mid-sized bat species which has the distiction of “threatened” in the United States. They are between three and four inches long with wingspans of up to 10 inches. The batsweigh anywhere from six to nine grams and have relatively long tails. Their fur is either medium or dark brown on the back with the underside being a lighter brown. The species is distributed across the northern United States and Canada. The population is dwindling due to deforestation, climate change, and especially because of the deadly white-nose syndrome. Populations across the country have declined as much as 99% since white-nose syndrome became widespread.

The northern long-eared bat hibernates in caves and underground mines in the winter months. During the rest of the year, they choose to roost in tree cavities and under tree bark during exfoliation. They breed in the early fall with females storing the sperm throughout the winter. In springtime, the females have their offspring. Shortly after birth (3 weeks or so) the young bats begin to fly. They can live for up to 18 years. Northern long-eared bats are most active after sunset, when they feed on beetles, moths, spiders, and other insects. It is important that bat species such as the northern long-eared bat are necessary for keeping insect populations in check.

If you notice northern long-eared bats in your home or attic, it is necessary that you contact a licensed bat removal company for safe removal. As this is a protected species, the company you hire must be sure to follow the specific guidelines for threatened bat removal. Visit our U.S. or Canada directory now to locate the most qualified bat removal services in your area!