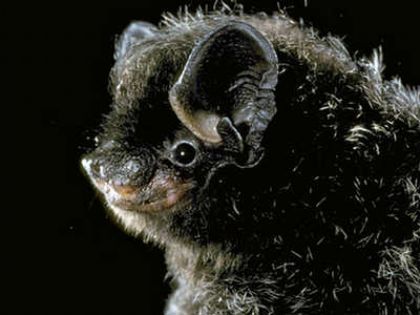 Silver-haired bats are commonly found in forests, forming their colonies in trees and hollows. Their fur is black with an occasional bat having a more dark brown color. Silver-haired bats have short, round, hairless ears. The tail is mostly without fur save for a small portion with light fur near the top. Silver-haired bats feed on insects, many of which are known pests to humans. This means that silver-haired bats, like many other bat species, are a necessary part of the ecosystem that allows us to live peacefully.

Silver-haired bats prefer to migrate to other forested areas during the winter months, meaning they spend the year living in tree cavities and hollows. Because of this, they are highly sensitive to deforestation. Silver-haired bats mate during the fall prior to migrating, but the embryos don’t develop until after hibernation has ceased the next spring. From April to sometime around the beginning of September, silver-haired bats can be found in most places across America. They are known to live for about 12 years.

Silver-haired bats prefer forested areas, but are known to occassionally invade the homes and attics of American residents. They are often mistaken for big brown bats, which are a much more common invasive bat species. It is important that, upon discovering silver-haired bats in your home or attic, you hire a professional bat removal company that complies with all national laws and guidelines. Bat Removal Pro makes your job as simple as dialing a phone number, as we pre-screen every bat removal service in your area. Each of our partners has a track record of excellence in the field of bat removal. Check out our directory and get rid of bat problems immediately!